Ben Nevis contains many classic routes to its lofty summit, but the most sought after would be the four ‘great ridges’ each of which has its own challenges. Castle Ridge is the least technical of the four yet don’t be fooled, it has several steep intimidating steps with allot of scrambling in between. The rock can be very slippery and escape difficult without the knowledge or skill set.

At nearly 300m in length and half the size of its bigger brothers, Castle Ridge is still longer than many ridges in England and Wales. It is not quite as sustained as Tower Ridge and has much easier access if the weather is not so good higher up the mountain. The most difficult section of the route climbs a 10-meter chimney feature that has lots of great holds for hands and feet. It is also the point where the ridge turns slightly right and overhangs the steep North Westerly face we so often see on the approach path. This is a great summer route for people looking to progress from scrambling to climbing or who aspire to climb Tower Ridge.

Castle Ridge is one of our favourite winter ridges. It is often much quieter than the other climbing areas on Ben Nevis and has an easier decent for anyone looking for a shorter day. Previous Winter Climbing experience is essential as crampon and ice axe technique are critical to a successful and safe ascent in winter.

Our team spends ALLOT of time in the mountains. We want to pass this knowledge onto you, whether that’s on a guided ascent to climb Ben Nevis or climbing it yourself with an instructor alongside to help out.

We offer guided ascents in both summer and winter conditions by request, we don’t have set dates for joining groups. This allows us to provide a tailored day out on the mountain, something that will add value to your experience whilst climbing one of the great ridges of ‘the Ben’.

Whilst climbing Castle Ridge your team will be attached to one rope. We believe the safest way to climb in this style which is often referred to as ‘moving together’ is to keep the ratios low which means no more than two people climbing with one of our experienced instructors. The price includes the use of harness and helmets plus the use of all technical equipment such as ropes and hardware. If you have a bigger team requiring an additional Ben Nevis guide, get in touch. We believe we are very competitive on price.

A guided ascent of Castle Ridge

As the day of your ascent of Castle Ridge approaches your guide will be in contact to discuss any final arrangements and discuss the prevailing weather forecast. At which point you can agree to a suitable time to meet in the morning and inform them of any kit requirements you have.

(Example itinerary base on previous participants)

0830 – You will be collected from your accommodation if it is within a few miles of Ben Nevis. Alternatively, you will meet your guide at Torlundy.

0845 – Conditions and group ambitions will dictate whether you start walking from Torlundy North Face car park or drive up a forestry track to a slightly higher car park.

0900 – Once over the style the excellent path winds its way gradually towards the North Face of Ben Nevis with spectacular views in every direction. The first landmark up ahead is the CIC Hut, a small alpine-style lodge nestled beneath the cliffs. In Summer we do not go this far but cut across towards a short gully which gives direct access to Castle Ridge. In Winter we may go to the CIC Hut first then traverse under the steep but safer cliffs to get to our route.

1000 – Climb Castle Ridge! The ridge winds its way up some straight forward scrambling to begin with before we climb some steeper steps direct. These sections are open corners so feet can be used on either side to take the weight off the arms. More grade II scrambling leads to further steep steps before an easy angles slab and traverse is reached which gives access to the crux of the route. At this point, your mountain guide is nice and close so they can provide coaching on this spectacular pitch. What follows is a more defined arete leading onto the shoulder of the summit plateau.

1345 – There are many ways to descend from here including but most popular being Ledge Route or the Ben Nevis Mountain path. If you have future plans to tackle the Skye Cuillin Ridge there might be an opportunity to descend a more technical route. Having spent the day with your guide they will be able to assess the best and most enjoyable way for you or your partner to safely descend. To read about how to navigate off Ben Nevis click here.

1615 – Expect to be back at the vehicles and on your way to a celebratory drink and well-earnt meal. 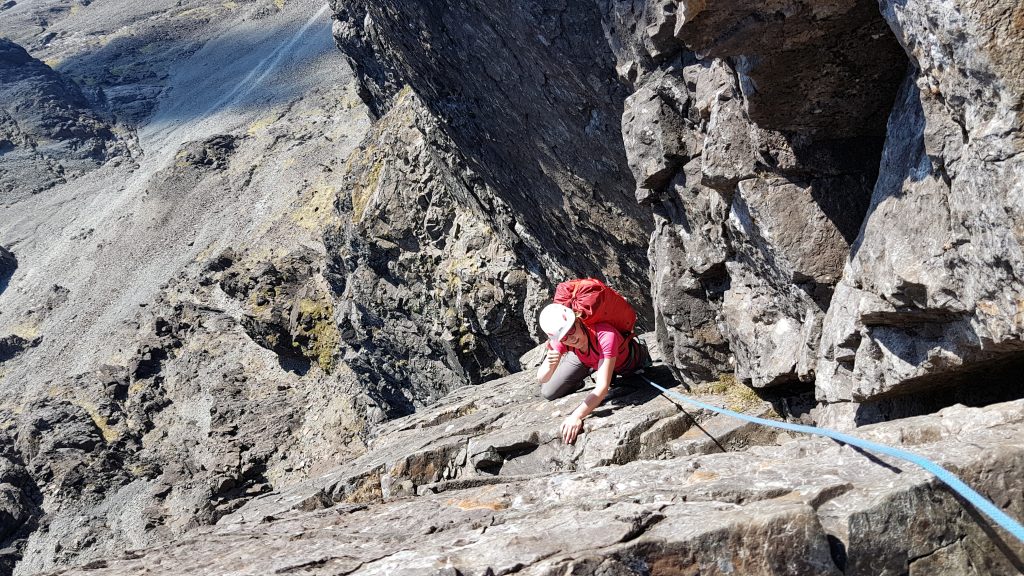