Here at Synergy Guides, our goal is to deliver a memorable and rewarding adventure in the mountains.

By working together with our friendly and professional team, we help you create a tailored mountain challenge. We achieve this by listening to your ambitions and building our mountain guiding and instruction around you. Whether that be scaling Skye’s formidable Inaccessible Pinnacle climbing a famous Scottish ice route such as Point Five Gully or taking part in one of our Himalayan Expeditions.

All of our climbing instructors are professionally trained Mountaineering Instructors or British Mountain Guides.

Our compact team are all active and enthusiastic; some say obsessive, about their own climbing. We don’t run an off the shelf mountaineering course, nor do we promote inflexible mountain guiding.

The Synergy Guides guarantee is to provide you with the quality of instruction you expect.

Who Are Synergy Guides?

Steve Holmes owns Synergy Guides; a new and modern mountaineering company based in Fort William. He was introduced to climbing whilst serving as a Royal Marine Commando. It was during this time he progressed from confident hill walker to passionate climber.

His work within the armed forces and private security industry allowed for extensive world travel which in turn planted the seed to continue his explorations as a civilian only with climbing as the driving force behind it.

This has led to taking part in numerous expeditions to the Himalaya, Africa, and Indonesia as well as spending a considerable amount of time climbing in European Alpine regions.

Winter is Steve’s favourite time of year and he loves seeing our customers getting the full ‘Scottish climbing experience’ in snow, rain or shine.

In his personal time, he enjoys developing new rock climbs in Scotland and trying to tick an ever-increasing list of winter routes on Ben Nevis. He has a love of trail running and lives locally with his wife Jane and Husky dog – Goose.

Synergy Guides are a lean team of passionate climbers, supported by a select number of top-class friendly instructors and guides.

Our aim is to make the most of each day and the prevailing conditions, the goal is to fulfil our guarantee of providing a memorable and valuable experience for our customers.

From the Highlands of Scotland to the remote mountains of the Himalaya, together with Synergy Guides – your adventure starts here. 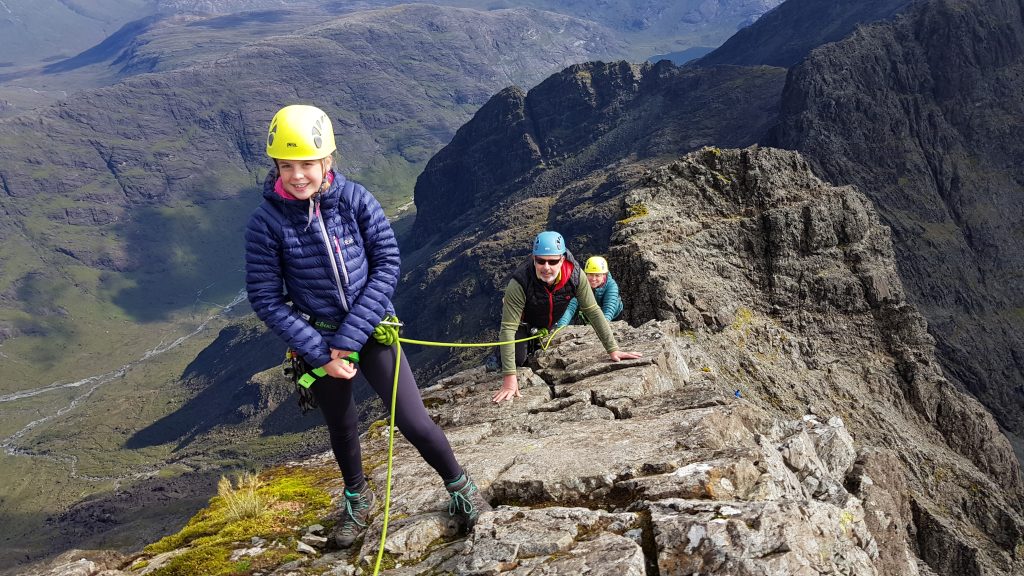